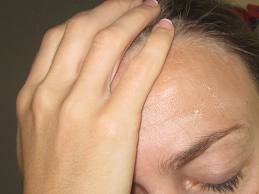 Birth trauma is a thing. Between 2- 5 % of mums get posttraumatic stress disorder after having their baby. Up to half describe their births as traumatic, but they don’t meet the full criteria for a diagnosis. That doesn’t mean they don’t suffer. That doesn’t mean they don’t cry every time they think back to the birth, or feel ashamed or scared or horrified when reminded of their birth.  But why do so many women get traumatised as a result of birth? Is birth so awful? Or so dangerous? Why did we evolve to be so frightened and traumatised by something so natural?

There are births where mums come away feeling on top of the world, deeply in love with their babies, and they remember their births with warmth and affection. This isn’t surprising, given that hormones released during birth are all feel-good hormones such as endorphins, oxytocin, and melatonin.  We were not designed to birth while we are frightened, and yet so many women DO birth when feeling scared and powerless and out of control. Why is that?

Is it their fault? The women that I work with all seem to think it is their fault. They blame themselves for not writing a birth plan, or for writing a birth plan, or for not being assertive enough, or for asking for too much, or for expecting too much, or for resting too much, or resting too little, or for having bodies that failed them. That is a terrible state to start motherhood in. It reminds me a little of women who blame themselves when they’ve been sexually assaulted. “I shouldn’t have gone to the party, I shouldn’t have been nice to him, I shouldn’t have worn those shoes, I should have fought back” and so on.

I don’t ever blame the woman or her body. But I do blame the systems that we birth in. At no point in our evolutionary history did we evolve to birth whilst frightened or coerced or controlled. And yet, in the stories I hear, women feel coerced, controlled, belittled, abused. We ask women to birth in brightly lit hospital rooms, with strangers around them, on their backs (the most vulnerable position for any mammal), with needles in their arms, with machines bleeping, unable to move, attached to a foetal heart monitor. We think it is normal to probe a woman’s vagina with fingers on a regular basis throughout labour, putting her on her back in order to do so. If she objects, we tell her that her baby may die (please don’t doubt this. I see it and hear it all the time). We ignore her cries for help on the induction ward, we ignore her when she tells us she is close to giving birth, we ignore her when she says it still hurts and she is not ready to be cut open or stitched back up. I see this all the time. We tell her she is “failing to progress” or that she is “not in established labour”, that she is “high risk”, or that her placenta will malfunction, that she isn’t pushing hard enough, or that her baby may die if she does not do what she is asked. Ignoring a woman in labour is a big deal, because she is at her most vulnerable, and she needs to know that you care enough to protect her. She can’t rely on her usual strengths and resources because she can’t fight or run away from trouble, she needs those around her to do that. If she is ignored or treated badly, that matters.

And afterwards, she blames herself. She tells me, how come other mums are fine but I’m not. How come I didn’t fall in love with my baby straight away? How come I feel like I’ve been assaulted, when they were just trying to help me? How come I can’t stop thinking about the birth and crying about it? Why can’t I just be grateful that I have a healthy baby? Other people are also telling her this.

What if they came away knowing that what they have experienced is obstetric violence, and that they are not alone, that it was not their fault. That things need to change. We need to stop blaming women, silencing women, ignoring women, when they tell us that they felt like they had been assaulted in the birthing room. It’s a thing. Let’s shine the light where it belongs – on the normalised but abusive institutional practices in the birthing rooms. Let’s begin to shout about this, question it, change it. Let’s hear what women have to say about the way they felt during their births. Let’s treat women better, and you know what will happen? Better births will happen. Happier mothers will happen. Less distress, fewer mental health problems, happier families.